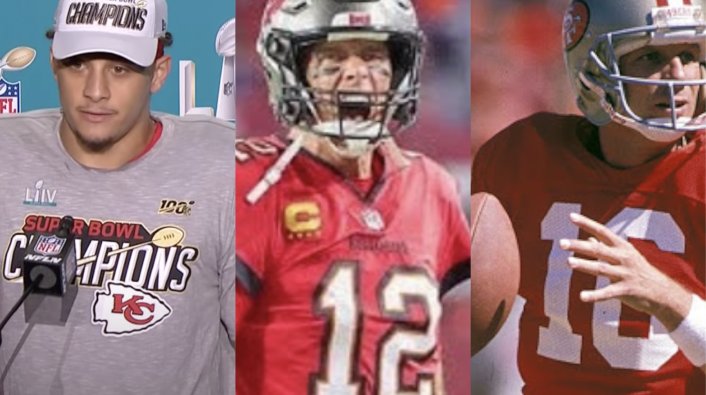 When Patrick Mahomes engineered a game-winning drive for the Kansas City Chiefs near the conclusion of their primetime showdown against the Los Angeles Chargers, it put the young quarterback in rarefied air. Upon defeating their division rivals 30-27, the Kansas City Chiefs kept their 25-game winning streak (in games that Patrick Mahomes starts and finishes) intact during November and December. The thrilling victory marked Mahomes' sixth straight come-from-behind win when trailing at halftime, and more impressively, it was the 14th fourth-quarter comeback of his career. If he maintains his playoff-winning percentage and adds another ring or two to his collection, it might be enough to supplant Tom Brady as the "G.O.A.T." In fact, numerous pundits in the sports news media, such as Kyle Brandt (from the NFL Network), Nick Wright (from FS1), and Shannon Sharpe (FS1), have already begun the proverbial royal coronation. Max Kellerman (from ESPN) recently said, "[Mahomes] is better than everyone who's ever lived" during a recent episode of Keyshawn, JWill & Max.

While traditionalists and critics may argue that a transition of power from Tom Brady (a seven-time Super Bowl Champion) to Patrick Mahomes is premature, many of them were quick to anoint Brady over Montana long before he surpassed his childhood idol in championship rings. Mahomes doesn't have the hardware to boast yet, but he's proven that he can match Brady's best seasons statically. He threw for 50 touchdown passes his first year as a starter; Brady did not do that until he was 30 years old on an undefeated team with a plethora of veterans who had already won Super Bowls with one another.

The best way to put Mahomes's greatness into perspective is to compare him to some of the best quarterbacks in the history of the league, who have also displayed a knack for orchestrating comeback wins on the biggest stage.

San Fransico 49ers' great and four-time Super Bowl Champion Joe Montana registered 25 fourth-quarter comebacks during his career.  Two-Time Super Bowl Champion John Elway notched 31 fourth-quarter comebacks, while Peyton Manning and Tom Brady are tied at the top of the list with 43 each. All of the aforementioned quarterbacks are in the 'G.O.A.T' discussion, but unlike those all-time great signal callers, Patrick Mahomes has never benefited from the likes of a defensive unit ranked in the top five or running back amongst the league's top five in rushing. Mahomes has carried his teams in pass-happy offensive schemes that rely heavily on his arm strength, accuracy, and his proclivity for comebacks in highly contested games. More importantly, his clutch play when the money is on the line has resulted in an 8-3 all-time playoff record (two of those losses came to Tom Brady-led teams), during which time he has thrown 28 touchdown passes and seven interceptions with a passer rating of 105.7. He's basically Aaron Rodgers in his prime, but with a 'Clutch Gene' and a playoff record far better than .500. Now the only question is, can Mahomes do what Rodgers couldn't do when he had his best-supporting casts? Which would be winning multiple championships while maximizing his full potential as the most complete quarterback to have ever stepped on an NFL field.

As of week 11 in the NFL regular season, the Kansas City Chiefs are the odds-on favorites to win Super Bowl LVII, and Patrick Mahomes currently leads all candidates as the player most likely to win this year's MVP award. With Tom Brady having a down year in Tampa Bay, the Buffalo Bills reeling in the AFC standings, and a Bill Belichick-led team without a reliable starting quarterback, the table has been set for the Kansas City Chiefs to win their second Super Bowl in four years. On the flip side, this also represents an at-risk time for the Chiefs to underachieve, similar to the old St. Louis Rams teams led by Kurt Warner or the loaded Indianapolis Colts squads helmed by Peyton Manning during the 2000s. Both of those explosive offensive-based teams won their first Super Bowl appearances before losing the second time around and never being heard from again.

The Kansas City Chiefs currently have the best record in the AFC (8-2) and the fifth toughest strength of schedule for the remainder of the regular season. Statistically, what Patrick Mahomes has been able to accomplish in the wake of losing the superstar wideout such as Tyrek Hill, is comparable to the feats that Joe Montana eclipsed without Jerry Rice and the heights that Tom Brady reached long after Randy Moss departed from the New England Patriots. When Joe Montana was in his heyday with the San Francisco 49ers, his team's biggest roadblock to the Super Bowl was often the New York Giants teams coached by Bill Parcells. Decades later, Tom Brady's biggest adversary with the New England Patriots was frequently led by Ray Lewis and some of the stingest defensive units in the history of the Baltimore Ravens. Patrick Mahomes has no such roadblock, in his conference, on the defensive side of the ball. In fact, this year's variation with the AFC West is probably the worse it has been since he became the starting quarterback of the Kansas City Cheifs. With Andy Reid and Eric Beinemy at the helm of the offensive playbook, Mahomes has the best head coach and offensive coordinator combination in the AFC conference at his disposal.

Patrick Mahomes has not lost a regular season game during November or December in three years, but this time around, he'll need to carry that momentum throughout January and early February to finish the 2022 season with his second ring and close the gap between himself, Tom Brady and Joe Montana. If not, his star tight end, Travis Kelce, will be a year older at the start of the 2023 season, his offensive coordinator may have accepted a head coaching gig by then, and his conference nemesis, Josh Allen, will be yet another step closer to loosening his stronghold on the road to the Super Bowl.