Two Months Ahead of Thanksgiving, Angry Turkeys Are Terrorizing the Town of Woburn 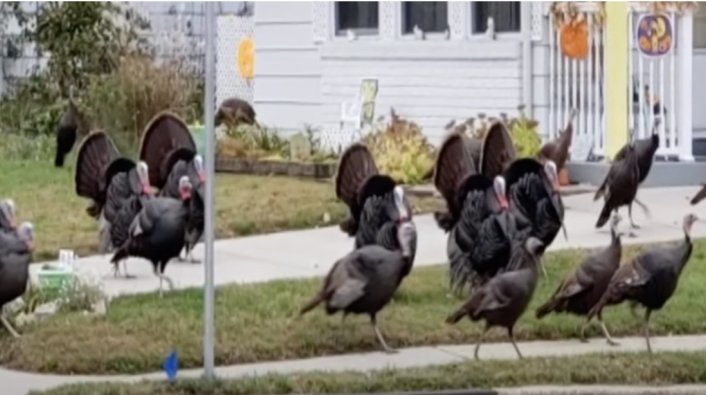 When the sun goes down, and darkness looms over the city of Woburn, Massachusetts, fear sets in for the residents as a flock of wild turkeys patrols the area, running down cars, lunging at people, and trapping them inside their homes. On the surface, this might sound humorous, but wild turkeys have a wingspan of about five feet, they're aggressive, and they can run about 55 miles per hour. This nightmarish dilemma has become a recurring theme every night for the locals. Apparently, the most fearsome of the bunch is a wild bird that a certain resident has nicknamed 'Kevin.'

"The most aggressive one is Kevin,' said a resident of the area named Meaghan Tolson. "I feel like Kevin kind of hypes them up, and Kevin is like 'Let's chase these people,' and they're like, 'Let's do it. Even if you are parked, Kevin will try to get in your car. You have to open your passenger side door and lure them over there, then make a clean break to the house. The other turkeys 'are three ladies because their coloring isn't distinct; [their names are] Esther, Gladys, and Patricia."

David Scarpitti, an official from the Mass Wildlife organization, believes that the wild turkeys have become emboldened because people in the area tend to feed the birds when they are hungry and run from them when they show aggression. So, as the people of Woburn scramble to find a solution to prevent the Turkeys from terrorizing their neighborhood, an 8-year-old offered a compelling remedy, now that the holiday season is slowly approaching.

"Kill them and eat them," Leo Tangu said when asked for his thoughts by a local news station.

The town of Woburn is not the first to have encountered an aggressive gang of wild turkeys. Two years ago, the people of Toms River (in Ocean County, New Jersey) made national headlines for their battle with a flock of aggressive turkeys.