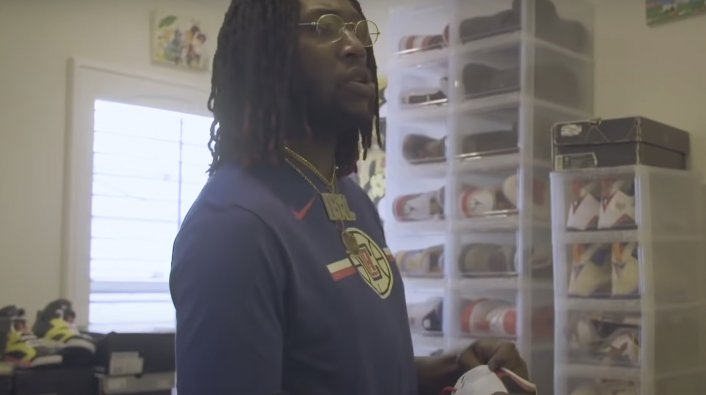 Previously, Montrezl Harrell was charged with trafficking less than five pounds of marijuana following a traffic stop on May 12. Kentucky State Police pulled the NBA player over and found three pounds of marijuana in vacuum-sealed bags located in a backpack in the car. Harrell was given a citation at the scene and then formally charged. Now, lawyers for the player are saying Harrell has “never” trafficked weed or participated in “any other illegal activity.”

Drew Findling and Marissa Goldberg—attorneys for Harrell, say he is innocent and also pointed out Harrell was not driving the vehicle he was pulled over in. “We want to be clear that Mr. Harrell was not driving the vehicle and following the stop he was only given a ticket to appear in court at a later date for a marijuana-related charge as were all occupants of the vehicle,” said the lawyers. They continued by saying, “Mr. Harrell was never placed under arrest. We believe that there are legal and factual issues with this case that will be addressed in court if that becomes necessary.”

The 28-year-old NBA player is expected to appear in court next month. If convicted on the felony count, Harrell could get up to five years in prison.

Reports surfaced noting NBA forward Montrezl Harrell was arrested and charged with drug trafficking after police allegedly found three pounds of weed in his car during a traffic stop. The NBA star is now facing jail time for the issue.

Kentucky State troopers pulled over Harrell on May 12 for driving a Honda Pilot rental too close to cars ahead of him. After stopping him, the cops claimed they smelled weed. The player reportedly admitted to having weed and pulled out a “small amount” from his sweatpants. Police searched the car and found a bag containing three pounds of weed in vacuum-sealed packages.

Montrezl Harrell’s arraignment was scheduled for this past Monday. The current free agent was charged with trafficking less than five pounds of marijuana. Harrell is facing a Class D felony for first-time offenders and could face up to five years in jail and a fine.