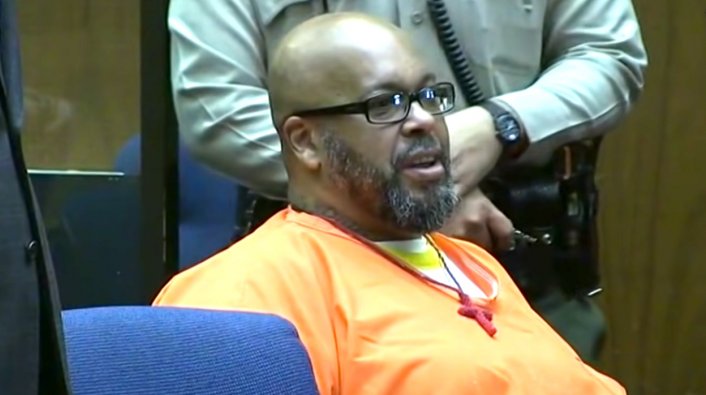 On Wednesday (June 8), Suge Knight testified in court as part of the wrongful death lawsuit brought against him by the family of Terry Carter, the man Suge ran over and killed outside of Tam's Burgers in 2015. Suge was initially charged with murder for Carter's death, but the charge was later lowered to voluntary manslaughter in 2018 as part of a plea deal. Suge was convicted of voluntary manslaughter in September 2018 and sentenced to 28 years.

The day Carter was killed, Suge was on set of Straight Outta Compton to speak to Dr. Dre about the film, which tells the story of N.W.A. During his testimony, Suge revealed that police told him that Dr. Dre had put out a hit on him in 2014 when he was shot seven times outside of Chris Brown's party.

Suge stated, "Dr. Dre—we’ve been really good friends for years. Matter of fact, I know his kids, he knows my kids. And I was told that he had paid some guys to harm me. I didn’t believe it because authorities do lie. So I went up there. …I was going to talk to him and say, ‘Hey man, I’m not going to react to what authorities say about you having something to do with me getting shot. I just want to make you aware they are saying this, putting it out there.’”

Suge then stated that he went on set to speak to Dre about what he had been told about the alleged hit by authorities, and Suge was told that Dre and Ice Cube were too busy to meet with him. While he was leaving the set, Suge says someone stopped and told him, "Hey, Cube wants you to come (back) because we’ve been trying to catch you to take care of you."

Suge explained that he told the crew that he didn't want to wait around the set for long because he had plans with his 5-year-old son. Suge added that Cle "Bone" Sloan, who was working security on set, got "aggressive" over a joke Knight told. When Suge spoke about someone trying to put something on his windshield, his lawyer asked, "Were you ever served with a restraining order that Dr. Dre allegedly had on you?: Knight responded, "No, never."

Suge continued, stating that Terry Carter called him when he was leaving the set, telling him to meet at the home of Dwayne "Knob" Johnson, who lived across the street from Tam's Burgers. Speaking about a conversation with Carter, Suge stated, "“He said, ‘They’re trying to take care of you, get some things squared away. Dre’s gonna come by Knob’s house. Come meet me over there.’ He said, ‘Man they’re trying to give you some bread.'"

Suge says he was then ambushed by gunmen, including Cle "Bone" Sloan, who Suge says lunged at him with a gun in his hand, and started to punch him through his car’s open window. Suge added that he feared for his life and acted in self-defense when he accelerated and drove toward Sloan and Carter, killing the latter.

Attorney Lance Behringer, who is representing the family of Terry Carter, asked Suge, "You want this jury to believe that Bone Sloan was there to kill you, and he had a gun that he intended to use to kill you, but instead of using that gun, he decided to throw punches. Is that true?"

Suge responded, "That’s not true at all. The truth is this: Tam’s is called 'Murder Burger' for a reason. One thing we all know is, you can’t do anything by the area of Tam’s because of the cameras. …Nobody pulled their gun out by Tam’s. Everyone knows there’s cameras. Ask anybody, they call Tam’s ‘Murder Burger.’ Lots of people who didn’t know they have cameras there, they’re still in prison today."

Suge later added, "I hadn’t done anything wrong to these guys, for them to want to kill me," and he stated that there "was a contract," although he didn't clarify what that meant.

The civil case, which is seeking more than $10 million in damages, is expected to last into next week before going to the jury.