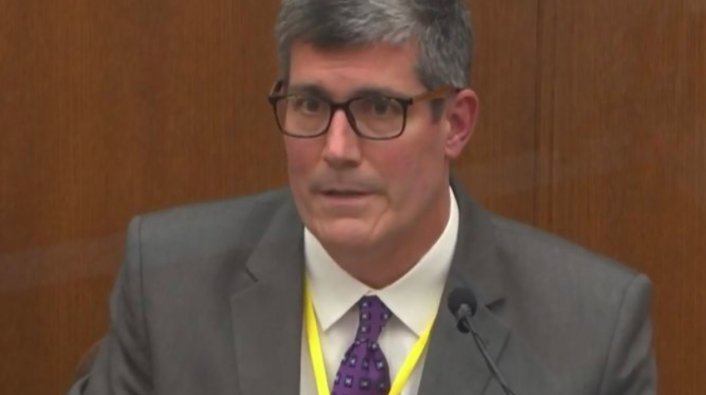 Previously, Dr. Bradford Langenfeld testified that George Floyd likely died from a lack of oxygen after he was brought into the Hennepin Medical Center, where he tried to resuscitate him. Now, the Hennepin County medical examiner recently took the stand in the trial and noted that the pressure on Floyd’s neck “was just more than Mr. Floyd could take” based on his heart condition.

Dr. Andrew Baker revealed that he found subdued, restraint and neck compression,” and that those things mentioned led to George Floyd’s death. The doctor went on to say that Floyd had a narrowing of two heart arteries, an enlarged heart that required more oxygen than usually needed, and severe heart disease.

Baker went on to say, “And in my opinion, the law enforcement subdual, restraint, and the neck compression was just more than Mr. Floyd could take by virtue of that, those heart conditions.” Baker’s testimony is in line with other medical experts, who said Floyd died because of a lack of oxygen from the way he was being restrained. Baker was cross-examined and noted that previous drug use along with heart disease “played a role” in his passing. An examiner who testified this past Thursday noted that a healthy person who would have gone through the same treatment Floyd received would have died as well. Stay tuned for more updates.

Dr. Langenfeld pronounced George Floyd dead after trying to resuscitate him, and he theorized that Floyd's heart most likely stopped because he didn't get enough oxygen. Dr. Langenfeld stated, "I felt that at the time, based on the information that I had, it was more likely than the other possibilities."

Dr. Langenfeld stated that Floyd's heart had stopped by the time he arrived at the hospital, adding that he was not told of any efforts at the scene by bystanders or police to resuscitate Floyd. He added that paramedics told him they had tried for about 30 minutes to resuscitate Floyd.