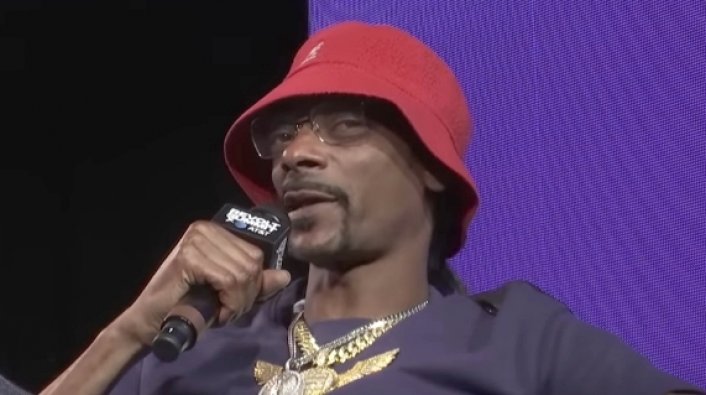 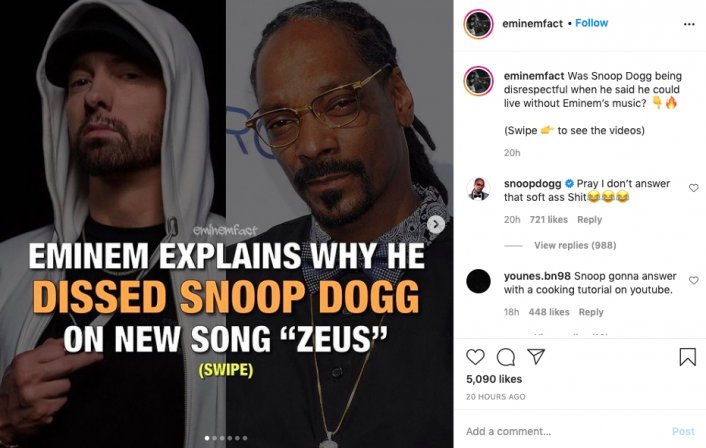 Eminem’s “Zeus” track has been making waves, especially with bars that were focused on Snoop Dogg. The bars directed at Snoop found Em saying “Last thing I need is Snoop doggin' me/Man, Dogg, you was like a damn god to me/Nah, not really/I had 'dog' backwards.” Now, via Instagram, Snoop has given his thoughts on Em’s diss, while laughing at it in the process.

An Eminem fan page called “EminemFact” posted Eminem explaining why he chose to call out Snoop on “Zeus,” and this led to Snoop hopping in the comments of the post to say his part. Snoop said, “Pray I don’t answer that soft a** s**t 😂😂😂.” Take a look above.

Eminem appeared on Shade45 Thursday to wrap up the XM station's yearend show for a track-by-track breakdown of his latest output, Music to Be Murdered By: Side B. When the conversation landed on "Zeus," which features a few notable name drops, including Snoop Dogg and Rihanna.

While discussing Rihanna and the offensive lyrics he had regarding her domestic abuse situation with Chris Brown, Em said, "Honest to God, I told Paul this when it first happened. First, I don’t know how somebody got it. Second of all, I have zero recollection of even remembering doing that verse."

"Like, the rhyme schemes didn’t even sound familiar to me, so I was caught off-guard," he added. According to Em, he was most likely working on that verse during the "early stages" of recording his 2009 album, Relapse. Em said it was when he was attempting to relearn his rap style, but "I'm not making excuses for it. I said it, and I was wrong for saying it. It was f**king stupid."

Regarding Snoop Dogg, who left Em out of his top-10 when asked during an appearance on the Breakfast Club, much to the Detroit legend's chagrin. But it wasn't the fact that Snoop didn't rank him in his top-10 that rubbed him the wrong way. It was something Snoop said afterward that left Em feeling more than slighted.

"Everything he said, by the way, was fine, up to a point," said Em. "Him saying Dre made the best version of me, absolutely, why would I have a problem with that? Would I be here without Dre? F**k no, I wouldn’t. The rappers he mentioned from the ‘90s—KRS One, Big Daddy Kane, [Kool] G Rap—I’ve never said I could f**k with them."

"I think it was more about the tone he was using that caught me off-guard ‘cause I'm like, where is this coming from? I just saw you, what the f**k? It threw me for a loop,"  Em continued.  "I probably could've gotten past the whole tone and everything, but it was the last statement where he said, 'Far as music I can live without, I can live without that sh**.' Now you’re being disrespectful. It just caught me off-guard."

When asked by those around him how he planned to respond to Snoop's remarks, if at all, Em said: "I didn’t know what to do about it because it confused me ‘cause I’m like, bro, same team. We’re on the same team. And I have never in my career, my entire career, said a disrespectful word about Snoop."

The discussion of "Zeus" begins roughly at the 28min mark.